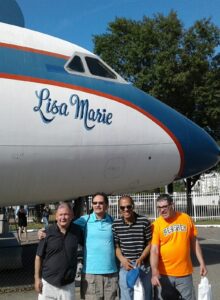 In Nashville we will have orchestra seats at a performance at The Grand Ole Opry, the world’s largest broadcast studio. In addition, we’ll take a trip on an old time trolley along the river through downtown Nashville and eat at one of Nashville’s delicious restaurants. We also visit the famous Music Row where many country music singers have shops. Other attractions include a luncheon on the General Jackson steamboat, the Country Music Wax Museum, the Country Music Car Museum, the Johnny Cash Museum and outstanding restaurants with terrific Southern cooking.

We are then onto Memphis! In Memphis we will visit Graceland! Elvis’ 15,000 square foot mansion that is decorated as it was during his lifetime. In addition to the mansion, we will see the racquetball building and the trophy room housing Elvis’ many awards, gold and platinum records, jewelry, mementos and costumes. We’ll also visit his grave, his private jet, the “Lisa Marie,” and his car collection, including the famous Pink Cadillac. We will visit the STAX MUSEUM which is known as the museum of American Soul music. What began as a tiny record store in an old movie theater grew to become one of the most important music recording studios in the world. It launched the careers of Ike & Tina Turner, Aretha Franklin, The Jackson Five, Sam Cooke, James Brown, Ray Charles, Isaac Hayes, Otis Reading, Wilson Pickett and dozens of other artists whose influence remains vital in the music of today. On its many varied labels, Stax Records also recorded such legends as Rev. Jesse Jackson, and the Grammy-winning comedic genius Richard Pryor. We also take a riverboat lunch cruise on the Mississippi River and visit the Riverfront Museum. We will also spend a day on Beale Street, world famous for its live jazz and blues! This trip has it all. Sign up today!